We have added a page under the Documentation tab that contains user documentation for the LibApps in the LibX Core Package.  Here is a link to that page.

The documentation includes information on the following packages:

The Process COinS LibApp, which finds OpenURL COinS on a page and inserts a cue that will link users to the library’s search for that COinS’ resouce, is also documented.

If a user installs directly from the webstore, they won’t have an edition activated.

To ensure that your users will activate your edition upon install, follow these instructions.
___

Update 10/3/2012: We are really close to making LibX for Chrome comply with manifest v2, expect it to appear in the web store soon. Ironically, after we were 90% done with the necessary changes – converting from the eval-based JsPlate to the eval-free AngularJS framework, Google reneged on their prohibition of eval() – it will be reallowed in future versions of Chrome.

LibX for Chrome is currently broken, and it’ll take a long time to fix it. Use LibX for Firefox instead.

Google really took us by surprise. The changes to LibX to conform to Chrome’s expectation would be tremendous, and at this point we cannot say how/if we can make them.

As of 7/31, Google changed how to install extensions in Google Chrome.  Previously, LibX users could click on a link with a .crx file and the extension would be downloaded and installed. According to the new policy, users can no longer simply click. If a user clicks, they will see this instead: 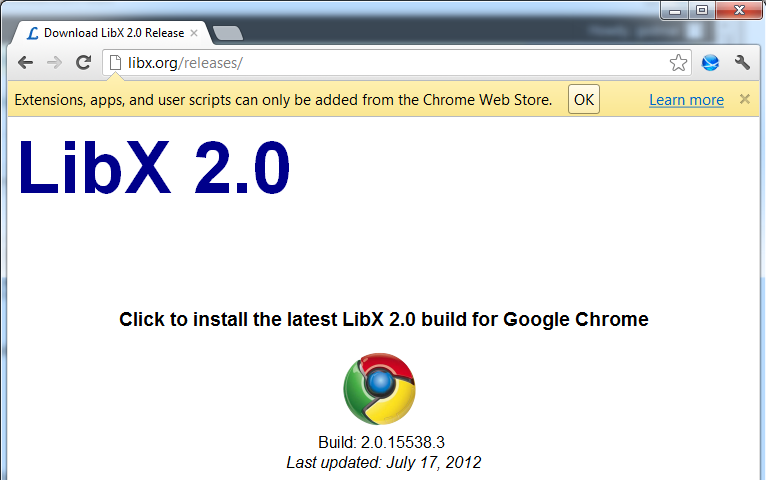 Users then have to download the .crx file, save it into a folder, and then drag-and-drop it into the extension tab, as described under “Steps on adding extensions from other websites“.

Obviously, this is an unsatisfactory situation. We are currently investigating whether it is possible to make LibX available via the Chrome Web Store.